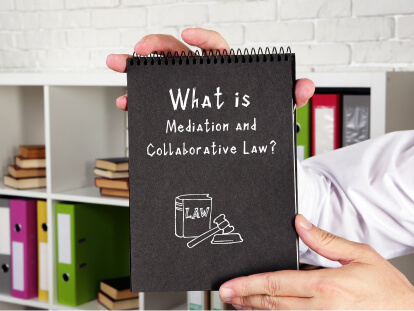 Divorce proceedings can be quite stressful, especially if there are several assets to divide or you can’t decide on a child custody agreement. In many cases, spouses choose to have their divorce attorney represent them. This can be ideal for couples who would rather have their legal advocate to help them navigate the collaborative divorce process.

In cases where the couple cannot resolve their issues, they could opt to bring in a third party. This is called mediation, a much faster way to resolve disputes that is usually more effective and allows both parties to save money. Mediation also typically results in less stress overall for everyone involved, but which one is right for you?

What Is Collaborative Divorce?

Collaborative divorce is a more recent approach to divorce developed in 1990 by Stuart Webb. It is based on collaborative law, his creation. Collaborative law is an alternative dispute resolution often used in divorce proceedings or family law cases such as child custody battles, adoption, or domestic violence.

Each party involved in the divorce must hire their lawyer and can bring in other subject matter experts if needed (ex: financial professional). During a collaborative divorce, if either spouse threatens to sue the other, the proceedings are concluded, and the consulting lawyers cannot represent them any further. They’ll each need to hire a litigator to represent them in court.

Many advantages come with settling divorce cases outside of court. Going to trial and presenting a claim to a judge can be very stressful, and many prefer to avoid that. Since each spouse has an attorney, things will run more smoothly than if they tried to settle things independently. Here are some pros to opting for a collaborative divorce.

Both attorneys are present for every conversation; the couple will never be left alone. All issues will be individually addressed until everything is resolved and a settlement agreement is reached. This could take less than a day for couples that don’t have a lot to iron out.

Ultimately, whether or not a couple chooses collaborative divorce depends on their unique situation and overall needs. If you feel this is the right option, ensure you and your spouse are unified.

When Is Collaborative Divorce Best?

The collaborative divorce process is best for couples who wish to have legal representation or want to avoid a lawsuit and mediation. It is also helpful in resolving issues that fall under family law, like child custody disputes.

You Wish To Avoid Litigation Without Mediation

Litigation is simply the process of taking legal action against someone. For couples that want to avoid a lawsuit and would instead not go through mediation either, collaborative divorce is the next best option.

You Want a Sole Legal Advocate

If spouses want to have their own attorney, this process would be the ideal choice. Some couples want to have individual legal representation because they’ll feel more confident navigating the nuances of their case. Lawyers can help divorce proceedings run much smoother.

Mediation is another alternative dispute resolution that involves bringing in a neutral third party as a mediator, usually a consulting lawyer. This option is best for couples who aren’t able to come to an agreement and resolve their issues without conflict.

The mediator’s role is to help both parties find a compromise. They can also offer advice and assist couples in drafting their settlement agreement. The mediator doesn’t take sides; they help break down the issues and help teams communicate effectively to reach a solution that benefits them.

There are many advantages for those who opt for mediation over a collaborative or traditional divorce. Mediation can save divorcing couples time and money when done correctly. Here are some of the perks that come with choosing this method.

As you can see, there are many advantages to this method of divorce. Even better — if you decide to work with us, you and your spouse can access mediation services for as low as $49.

There aren’t too many disadvantages to mediation, especially if both parties are willing to compromise, but there are a couple of things to consider before you choose this option for your divorce.

If you feel like it’s possible that you and your spouse will have trouble agreeing on things and will end up taking the case to court, mediation might not be the best option for you. This method works best for couples on the same page and willing to meet in the middle.

When Is Mediation Best?

For some couples, mediation will be the best option. It’s often more seamless for both parties, especially if children are involved.

Finalizing child custody arrangements, allocating child support payments, and determining alimony or spousal support (if applicable) is much easier in a setting where both spouses agree to be amicable and reach a fair solution.

Mediation allows you to put your family first. Long and drawn-out court proceedings can be very stressful for everyone involved, especially small children. The faster a resolution can be reached, the easier it is to move forward and not put a strain on the family that affects your relationship long-term.

Mediation is also ideal for those who want more say in the outcome. When it comes to issues like property division, many people prefer not to leave it up to a judge or go back and forth in collaborative divorce proceedings. If you can sit down with your spouse and come to an agreement that you both can accept, it will result in a better outcome for both of you.

The length of the mediation process is determined by how quickly both parties can settle. You can do that if you need to spend more time ensuring everything is as fair as possible. Or, if you and your spouse agree on everything, the divorce case can be concluded very quickly.

Mediation is much faster than a traditional divorce, which can take several months or even years when tied up in the court system. Collaborative divorces often take longer, especially since each party has their representation adding to the conversation. If you and your spouse can sit down with a third party and reach a compromise, you’ll save so much time and money.

Both Parties Willing To Be Transparent

You must be open and honest during mediation, or it will not work. If one or both parties withhold information or are defensive or combative, mediation will not be effective. You and your spouse need to be prepared to lay everything on the table, even the things that aren’t easy to discuss.

So, what are the differences between collaborative divorce and mediation? You’ll want to consider your time in reaching an agreement and how much you have to pay for the divorce.

Number of Outside Professionals

This number is much higher for collaborative divorce. Examples of outside professionals include child specialists and financial professionals (ex: accountants).

Mediation will typically take less time and save you more money overall, especially since you won’t each be paying a lawyer to represent you.

Couples who choose this option are usually willing to have a calm discussion and reach an agreement without conflict. Also, since neither party has an attorney present, it feels less like a battle against the other.

The outcome of mediation is often more substantial than the outcome of collaborative divorce; both parties are usually happier with the terms since they were able to figure it out as a unit.

Traditional divorce proceedings and collaborative divorce can move quite slowly, which usually means you’re spending a lot of money.

Check out the rest of our site for more content about important divorce-related issues. If you have questions, Divorce.com has answers.

How Does Collaborative Divorce Work and Is It Right for You? | DivorceNet

What is Mediation? | FindLaw

The Pros And Cons Of Mediation | mssattorneys.com

8 Benefits of Mediation | The Liberty Group

Will Divorce Mediation Work for You? | Nolo